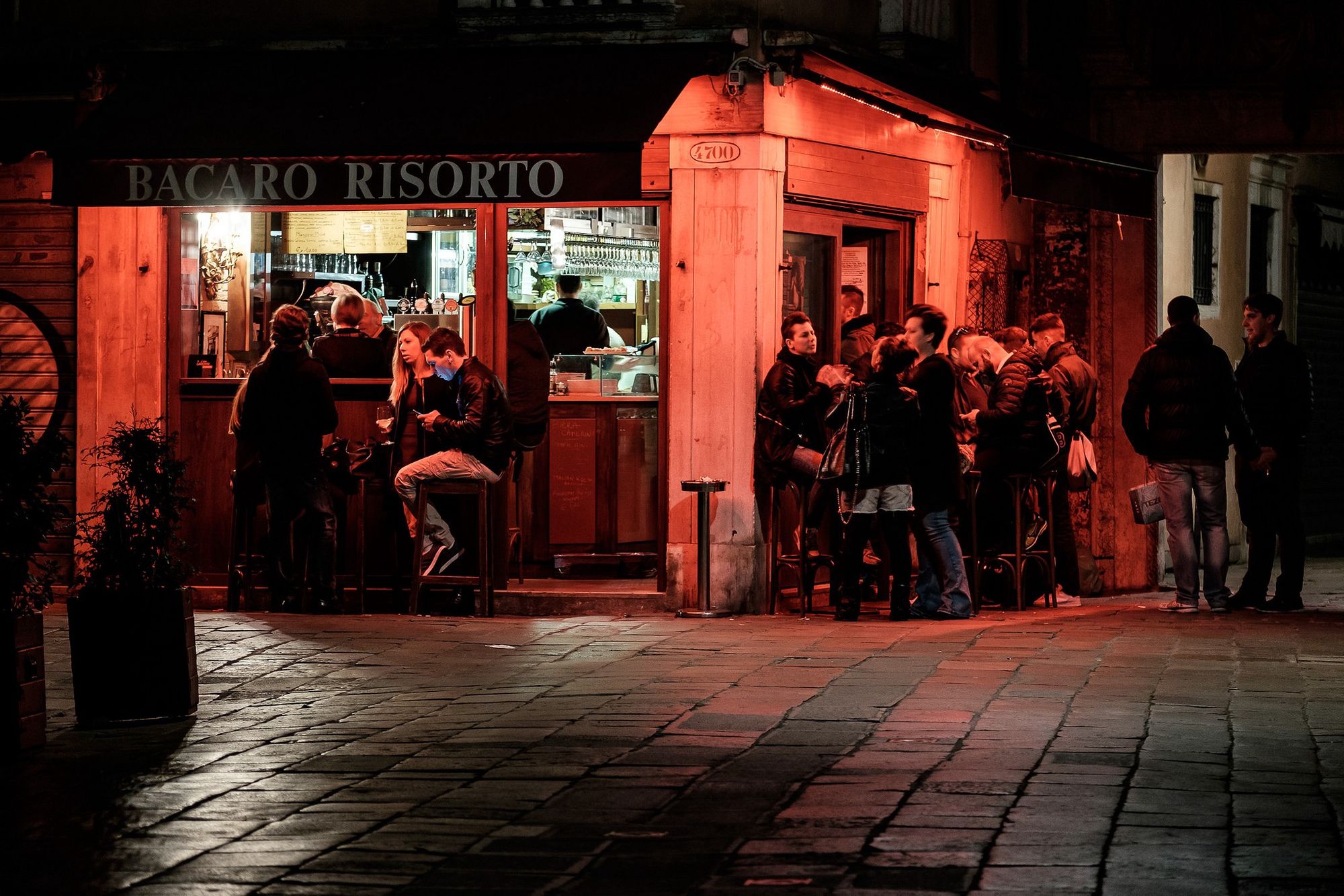 Cover image: “In the red corner” by Tim Abbott — CC BY-NC-ND on flickr

Lots of people have been, or want to go to Venice. Of those people, most think of Piazza San Marco and Rialto, of the Canal Grande, maybe of the Accademia. But very few, if any, know what living Venice is like.

The Veneziani (the Venetians) see a completely different city from what most tourists see. Their city is made of narrow alleyways (calli) and squares (campi) dotted which a plethora of small businesses, offices and houses. Venetians steer clear from the beaten paths as much as they can, to avoid the mess, the flocking tourists — and the inflated prices of the multitude of tourist traps.

What is a typical thing from Venice that most don’t get to see? Well, the bacari. A bacaro is a small bar where people goes to drink and nibble on some small meatballs, tartine and so on. This guide is all about mixing a visit to the tourism staples in the city with lesser known, but more authentic, destinations.

This tour should be easily feasible in one day, assuming you don’t want to slack around in places too long. In case you want to take it easier, you can do half on one day and half on the next. It starts and ends at the Santa Lucia Rail Station, as that’s where people are most likely to arrive and leave. It’s roughly a circular path that you should do in clockwise direction.

Onwards with the tour, Aoshima!

Thanks a lot to my friend Alessio for the original Italian text of the guide that follows, and for his permission to edit and publish it here.

Note: to follow this along and move around once you’re there, you can find all the places and the directions on Google Maps.

Good starting point is Do colonne near the train station, to the left right after the guglie (steeples) bridge.

We’re now nearing the Fondamenta degli Ormesini passing through the Ghetto and arriving at Al Timon: very nice place with the possibility of sitting down on a boat (barca) moored just outside to drink.

Further along is Paradiso Perduto with ombre and cicheti, the Venetian small wine glasses and tapas/finger food.

Going back towards Strada Nuova, stop at Alla Vedova: mandatory to get a polpetta (meatball) and an ombra. Warning, these polpette are addictive.

Next bacaro stop going towards Rialto is Ai Promessi Sposi.

Getting real close to Rialto now. Before going on the bridge, next recommended stop is Al Remer. That is Alessio’s favourite place, a bit tricky to spot but you’ll be able to sit next to the Canal Grande and see the Rialto bridge and Venezia, relaxing with a spritz (either bianco, that is just water and white wine, or Aperol/Campari — yes it’s an aperitif drink!).

Time to climb the Rialto bridge, heading back towards San Marco. It’s not recommended going to bacari in this area as it’s rather expensive. After seeing the Piazza San Marco, make sure you go to the Ponte dei Sospiri, the San Marco bell tower, and so on.

Optional: if you have some spare time you might want to visit the Arsenale, passing through the Riva degli Schiavoni (Schiavoni is an old name for people from Dalmatia) and, further ahead, the Giardini della Biennale. Heading back to San Marco again you have to pass through the Bacino Orseolo with a lot of gondole (that’s the plural of gondola). You’ll have a very beautiful sight.

From there, head towards the Ponte dell’Accademia and pass next to the Basilica della Maria della Salute, which is very very important for Venetians. You’ll eventually get to the Punta della Dogana, from which you can see Piazza San Marco almost from straight on the opposite side.

Further on you should check the zattere (rafts) and maybe pay a visit to the Gelateria Nico — if you do, you must get the gianduiotto.

Onwards to the last squero, San Trovaso’s, which is where they build and repair the gondole.

We’re then moving towards Campo Santa Margherita (a campo is a kind of piazza), epicenter of the Venetian nightlife. You’ll pass through Campo San Barnaba, which is where Indiana Jones comes out in The Last Crusade. Head towards the Ponte dei Pugni, where the story goes that they’d have matches back in the day. If you’re into photos you’ll usually find a greengrocer on a boat, which is a nice shot. You then get to the campo. Once you get there, anything is a-ok. Alessio used to be a regular at the Rosso, but any will do really.

Head back towards the city centre, visiting the San Rocco church; you’ll find you’re going towards Rialto, but from the other side. There’s two very notable bacari there, Bancogiro and Naranzaria; they’re in Erbaria, close to Rialto. Plenty of shops around there too. Do spade is another worthy bacaro near there.

By now it’s probably time to get back to the train station… you’re most likely drunk at this stage, anyway.

Thanks to Daniele Conti and Daniele Bonaldo for proofreading.
Share